If you’re looking for a caricature target for both late night talk shows and 24-7 news blogs, look no further than the staff of Hampshire College, the little Massachusetts college that managed to become the laughingstock of the nation when it opted to remove the American flag from campus for fear of … well … no one is really sure what they were afraid of because the justification didn’t really make sense in the first place.

Now, “laughingstock” might be a kind word. Millions were hopping mad, condemning the school and its faculty for what many consider not only ridiculous but also unpatriotic behavior.

To help fan those particular flames, the O’Reilly Factor dispatched its resident pot-stirrer, Jesse Watters, right to the home of the college president, microphone in hand and big camera following. The Hampshire president, Jonathan Lash, was not amused by the sudden appearance of the annoyingly comedic malcontent, for whom Hampshire College was an ideal target.

Watters met him in the driveway as the president was returning home, eventually following him from his car to his front door. The running commentary while they moved from car to driveway was the sort of content O’Reilly’s fans love Watters for … and the kind of thing Watters’ detractors love to hate him for.

As Watters demanded to know why the flag was taken down on campus, Lash repeatedly tried to dismiss the “reporter” … who does not understand the meaning of that word.

Lash whipped the door shut, but not before Watters got his shoe wedged, literally, in the door.

Watters leaned in, “… the whole country is laughing at you right now…” Then, to the joy of the audience, Watters invoked the veterans.

Lash once again told Watters he didn’t have anything to say to him and he should leave. Neither man was willing to move. Watters had a bit to film and a liberal to annoy. Lash wanted the cameras … and the comic … off his property. Eventually, someone called the cops, which, of course, only fanned the flames of Hampshire hating even higher.

After the segment aired, even more groups – both on and offline – got involved in lambasting Hampshire. These included a slew of veterans groups, who feel the removal of the flag, even temporarily, is an insult to their country and their service.

Those groups reveled in the scene on Lash’s front stoop, while others had yet one more reason to hate Jesse Watters … but you can bet both sides will watch the clip endlessly. 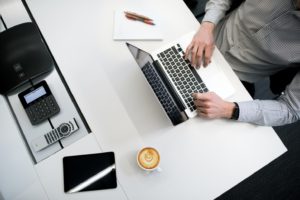